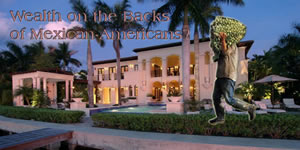 Who are Debtmerica’s Managing Partners? Debtmerica, LLC is a named defendant in the lawsuit, Torres v. Torres. When we looked at the management pages and the many websites owned or associated with the Debtmerica Managing Partners Jesse Stockwell, (A.K.A., Jesse E. Torres IV, Jesse E. Stockwell) we found that he  graduated in 2000 from the Wharton School of Business. He’s had a series of businesses since 2001, adjusting to failures, lawsuits and even action by The Attorney General of the State of New York. Jesse Stockwell’s hubris is displayed all over the Internet, and as such he was very easy to find information about, both good and bad.

One thing is for sure, Debtmerica is his goose that laid the golden egg. He protects it like a mother protecting her young, keeping her from negative posts and websites that could cause her harm. Jesse Stockwell, on his website of the same name, declares himself an expert on Internet Marketing. We think he is referring to his ability to create websites for the sole purpose of making sure the good reviews keep coming, and the bad ones disappear. He does seem to know, or at least have an instinct, as to what websites to spend money with; websites that appear to be consumer rating sites, but that give him almost total control. He has squashed bad press ranging from the Attorney General of the Great State of New York all the way to R.I.C.O. charges in a lawsuit that included extortion and death threats.
We present the facts that we found, all from credible websites and government agencies, and links to where we found them. The good, the bad and the ugly about Debtmerica LLC and Jesse Stockwell. We hope that by providing you with a story about the facts we discovered, you will be able to make an informed decision about this Wharton Graduate and his companies and whether or not you want to do business with him.
To quote a posting we found, “Is this really who you want restoring your credit reputation?”.
Be sure to see our related article on Who is Jesse Stockwell?
We have only scratched the surface of what we have uncovered about Debtmerica and its managing partners. Watch for our upcoming, in-depth coverage of what Debtmerica, LLC and Jesse Stockwell have in common with the following associated companies and websites we’ve found:
Other short-lived companies that were opened by Jesse:
Billy the Kid or Donald Trump? Please keep coming back to uswatchdogs.net to find out more facts uncovered about Jesse. We promise, The Good, The Bad & The Ugly
Coming Soon! – Debtmerica LLC. Senior Management: Be watching for our upcoming in-depth story on our research into the other Senior Management of Debtmerica LLC as featured on Debtmerica LLC’s Senior Management Page.
You can’t make this stuff up, the comments that follow each of Debtmerica’s Senior Management is from their own Debtmerica Authors & Editorial Team page.

Already Uncovered: Hard to find public email addresses that are now missing from the Contact Page at the Debtmerica LLC Website. After all, in fairness, you should get their side of the story.