Is Greg Whitten the “Bully Billionaire”? 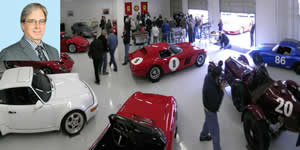 Greg Whitten & his multi-acre heated garage, where just 1 car is reported to be worth $52 million

We at the New England Watchdogs were about to publish a simple reprint of Billionaire Greg Whitten Paid: So Why The “Lies”? from the U.S. Watchdogs, when we received a copy of an email sent to the U.S. Watchdogs by Greg Whitten et al. through their attorney, Jay Hadley, and U.S. Watchdog’s response. It appears that the practices of Mr. Whitten in this matter would suggest the title the “Bully Billionaire”. Whitten et al. are apparently not happy with the stories being published by us and other U.S. Freedom Network Investigative Blogs concerning the actions of Greg Whitten et al. It all started when they received a request for information on a former employee’s retirement benefits. The former employee’s request was complete with the attached IRS notification letter that stated he may be due $6800 from Proximation LLC, which appears to have been absorbed into Numerix LLC., both effectively owned or controlled by Greg Whitten.

Be sure to see part I and III to this story

This employee was a New Englander, born and raised. There are many stories listed below with links to the documents provided by Greg Whitten et al., topped off with a disrespectful voice-mail left for the former employee. Here is what we believe happened after our investigation into this matter:

According to Greg Whitten’s Numerix agent, Ms. Marilyn Bartelme (Compliance Specialist of a Great-West Financial subsidiary), someone at Great-West or Whitten et al. didn’t report the accurate status of the former employee’s profit sharing/401K to the Social Security Office. Social Security sent a notice to the former employee informing him that he may have $6800 due him from Proximation, LLC, a company owned by Billionaire Greg Whitten. They stated that he should contact Proximation and inquire as to the status of the funds.

To make a very long story short, our former employee from New England is jerked around for months. He sends letters and emails and telephones Proximation and Numerix. Finally he gets a call from someone from the Whitten et al. group that is both disparaging and insulting. Basically it says, why are you bothering us for such a trivial amount? Hear it here. Left with no choice and having the attitude of a true New Englander, our former employee sends a certified letter to Numerix and threatens to sue them if they don’t fully answer the questions about his Profit Sharing Bonus.

The documents make clear the tactics of lies and/or pure incompetency by Whitten et al. and Great-West’s Marilyn Bartelme, and read more like a fairy tale than what is expected from an American Corporation when dealing with IRS regulated reporting.

The former employee had gotten sick from a problem with the altitude while working at the Proximation office in  Santa Fe New Mexico. This brought on catastrophic heart failure, a subject that he mentioned in numerous communications with Greg Whitten et al. In fact, he had no memory of that time period. After months of legal letters, Greg Whitten et al. finally dug out the documents. They showed that the documents sent to our former employee up to then were all lies. This smelled like a cover-up, but why? The employee had been paid. As soon as he received copies of that information, he wrote us and went on with his life.

The letter sent in reply to Greg Whitten’s attorney, Jay Hadley, summed up what happened better than we could:

“We are only interested in the truth. We only publish stories that are based on provable facts. While I’m sure your client is like all of the other powerful parties we take on, and not currently happy, the facts are indisputable. Whitten et al. did everything they could to deny Mr. X’ claim, even though he didn’t even have one. A cover up of nothing, for nothing. Why, after months of Mr. X sending very nice letters (you do have copies?), calling investment companies and contacting Whitten et al. like the gentleman he appears to us to be, you did not respond until he threatened to sue?”

Is the title,  “The Bully Billionaire” deserved by Greg Whitten?

Like so many of those in power, Greg Whitten et al. apparently did not like the truth coming out about their actions and will do everything in their power to try and silence those who expose those truths. It is pretty hard for Greg Whitten et al. to deny the correspondence sent out by their representatives to our former employee, which we have copies of, and letters from his attorney to us. Greg Whitten et al. sent a certified letter to the former employee at an address for which they had been notified he no longer resides. The address was that of his in-laws, one of whom is 87 and in ill health. One can imagine the effects receiving a certified letter can have to an elderly party. When the former employee sent an email to Greg Whitten et al. stating these facts, it wasn’t long before the U.S. Watchdogs received an email from Jay Hadley about the stories running on the various U.S. Freedom Network blogs. The U.S. Freedom Network responded:

“Thank you for replying to us. Let me start off with a simple fact. Your client was given numerous requests for his side of the story, both before and after the stories were published, but apparently decided not to respond. Additionally, the Whitten et al. documents sent to Mr. X left little doubt as to the facts in this matter. So your argument about a full investigation is not factually true, would you agree? In fact, we waited to publish what we felt was the real story, but were waiting for Mr. Whitten to respond. As is generally the case, after our stories climb up in the search engine ratings, people tend to be more forthcoming, as I believe Mr. Whitten is now.” See full correspondence.

It is up to you to decide, does Greg Whitten deserve the title of the “Bully Billionaire”? We will be putting up a poll shortly.

Be watching for part two of this story that will be posted here on the New England Watchdogs Network.